Earlier this year, I posted a possible Bosporan Greek army list.  With a great deal of feedback from some of the other posters (seriously, guys, I really appreciated it), I think  I got it into a workable state.  With the release of Warbook 2, I've also made a later period list.

Hoplites may only be taken before 200BCE.
This list represents the Bosporan Kingdom from the rise of Spartocus in 438 BCE to its conquest by Rome in 63 BCE. 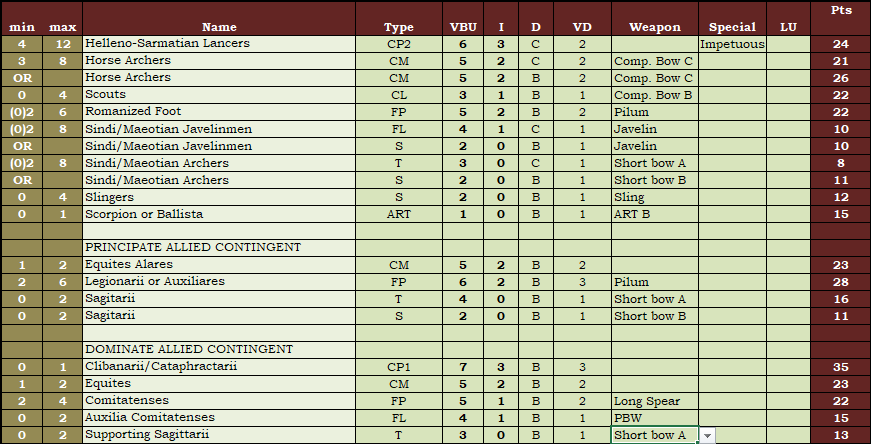 Principate allies may only be taken until 284.  Dominate allies may only be taken from 285 onward.  Supporting Sagittarii must form large units with Comitatenses.  Comitatenses without Supporting Sagittarii may be equipped with Pilum for +2 points per unit.
This list represents the Kingdom in its time as a Roman client state from 63 BCE to around 370 CE when it was destroyed by the Huns.

Any comments and critiques are welcome.

Overall looks good. If you follow the Late Roman lists the Comitatenses can either have supporting archers or pilum, not both.

Supporting Sagittarii may form large units with Comitatenses. Comitatenses without supporting archers may be equipped with Pilum for +2 points per unit.

Aha! I missed that restriction. Editing in now.