Yesterday at 6:25 pm by Nikkobourges

Our group is putting on the above at the EXcell Centre London being the SAlute 2019 war games show. We are putting on the game on behalf of the Society of Ancients so look for there stand will be using Impetus 2 rules. Any one interested please join us for a chat or take over a command for a while. Im on holiday so will be missing it so ask for Mark hes made the terrain and painted most of the figures for this game. Regards
Eric

I'll be going to Salute and I'll certainly pay a visit!
Any idea of the stand number?

Will check tonight and put it on this sight as soon as i know. Eric

Hello Jorneto its GF11 society of ancients stand. Ask for Mark he'll be glad to see you join in if you wish there will be several of us there. Sorry i will not be there to say hello. Regards eric

Think david edwards and richard jeffery cook maning the trade stand if you havent met them good that they talk to the paying membersip. Have a good day. Eric

I had a little chat with (I think) David Edwards and I could also admire the magnificent painting job done by Mark Goldsmith.

Always nice to exchange views on our favourite set of rules!

Hello Jorneto hope you enjoyed Salute. can I ask a favour my friends forgot to take photos of the game if you or your friends have some can you post them on site and Mark/'Alancould do a write up.
Maybe at next Mahon will do Troy based on the Iliad we have the walls of TroyAand ships and ancampment for the Achaemenid. Could introduce a few of the heros and give them special characteristics could be fun.
All the best Eric

Typing errors in last message last paragraph should be. 'May be next show will do Troy based on the Iliad, the wrath of Achilles, we have the walls of Troy and ships and encampment for the Greeks. Could introduce a few of the heros and give them special characteristics could be fun.'
All the best eric 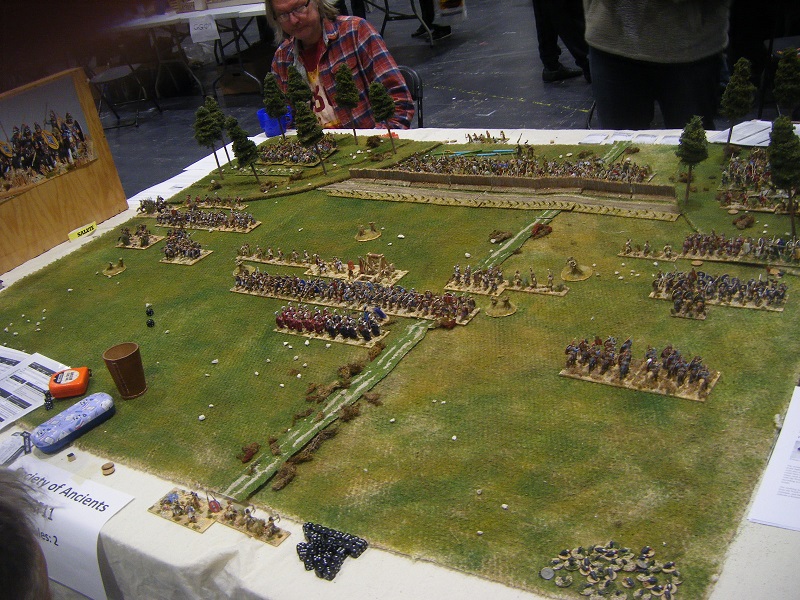 Here is picture of our Impetus II 'Battle at Harzhorn Mountains' We managed to conclude full game during the day with victory eventually going to the Romans. This is the 3rd refight we have conducted of this game, all 3 being hard fought games and going down to the wire. The Salute game saw both Roman flanks attacking the wooded hills to their front defended by German tribes who had nasty logs and boulders to hurl down the slopes at the advancing Romans. This was a special house
rule introduced for this game based on Harry Sidebottom' book 'Iron and Rust' Chapter 15. Unlike previous games the Romans managed to weather this storm relatively lightly. This enabled them to eventually overcome their opponents and thus allow them to begin threatening the German' flanks. However this took time due to the difficult terrain and the now depleted commands. To secure victory the Romans had to throw in their centre against the German frontal defences.
The centre initially saw a prolonged missile exchange which for once saw the Germans
being more effective than the Romans despite the artillery. Poor dice by the Romans and good rallying/cohesion dice from the Germans!
The Romans ultimately frustrated by their seemingly ill fortune in continuing this strategy threw caution to the wind and advanced on mass against the palisade. This saw a bit of a blood bath with most of the Romans being forced back with heavy casualties. The Romans saw victory slipping away as their flanks struggled to do
any damage to the Germans despite several flank attacks which would have put the Germans over their breakpoint threshold. The German cohesion tests generally rolling a 1 whilst the Romans a high number!
However luck swayed back to the Romans with Maximus the Roman General managing
(Against the odds) to push through the defences and kill the German unit he was fighting together with the German CinC. (Germans threw a cohesion of 6 and so had to test for attached leader. Brave dying on 5/6 which he did) Maximus was classed as a 'Severe' leader and all the German leaders were 'Brave'. We do like the customizing of leaders giving additional flavour to the conflict. This final combat at last pushed the Germans over their break limit, but it had been a close run thing.
We are slowly getting to grips with Impetus II and do think it gives a better game. Action is probably a little quicker than Impetus I mainly stemming from changes to the movement, particularly of groups.
Our main gripes are that the play sheets do have some things missing and cross referencing is not as good. When we have to refer back to the rules they are not always where we would expect them to be.

I do have one photo. But not from the game. Only us, caught admiring one of the roman units... 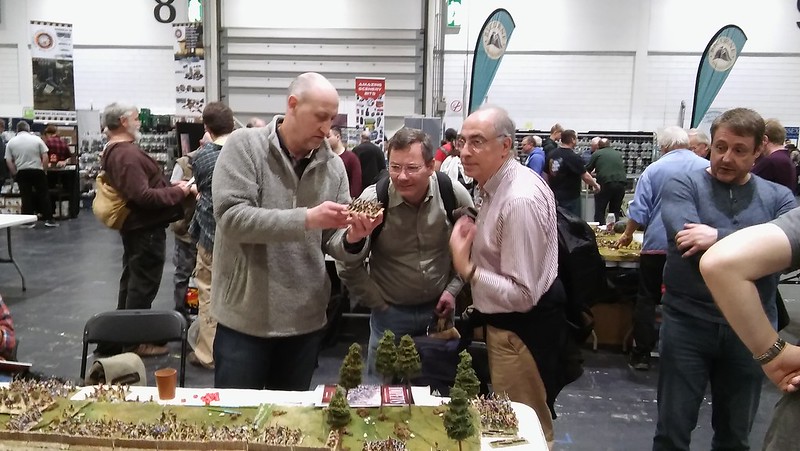 As for playsheets our group has created a few aids. A spreadsheet army builder, a 1 page Setup & key rules and a 2 page Quick Reference. All with hopefully large enough letters to allow an easy read. I already asked Lorenzo to make them available through his site.

Yes thats Alan holding the figures. Will look out on website for the aids you've created it all helps. Regards
Eric

Further coverage of our Harzhorn Battle

For anyone interested there is short snippet of the game on Youtube:
Visit: The Tables & Terrain of Salute 2019 Wargame Show' by the The Terrain Tutor.
(About 24 minutes into the video)
If you have not come across this guy before his site is well worthwhile for terrain ideas and inspiration.