Monday night we played an ECW game with Baroque Rules!

Both side played aggressively (as we wanted to test the rules to the limit). Initially the Royalist Right ploughed through the Parliamentary flank and threatened to roll up their entire army whilst a similar result was occurring on the other side of the table as the Roundheads Right broke the Royalist Left! A bloody and close engagement ensued that saw the Royalists just win!

A couple of pictures from the game!

We discovered Cavalry should not enter woods, well actually we knew that beforehand but retreating and pursuing Mounted Units sometimes have a mind of their own! 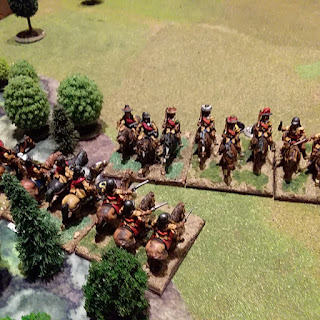 Parliamentary Infantry advance on their opponents! 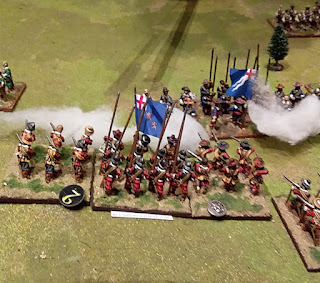 There are more pictures on the TSOG Blog!
TSOG Blog Link

Looking forward to having a few games soon. Most of my 'new projects' at the moment are for Baroque, one of them quite ambitious

Similar topics
» Baroque - ECW Game
» First game of Baroque
» Baroque, what a great looking game it is
» Baroque in 6mm?
» Going for Baroque...