Latest topics
» saladin at the gates, rinaldo of chatillon

» Death of a general + Flank charge on a group

» gap in the Basic Impetus Rules?

Our group will be putting on the above battle at Cavalier 2020 on sunday february 23rd at Tonbridge. Anyone from this forum is welcome to come along and join oin for as little or long as you like. We are putting the game on on behalf of the Society of Ancients so look out for thier stand.

Will do, should go on website early March. Regards Eric

Six of us put the game on but by close of play all our commands were taken over by other impetus players who turned up so we ended up in an advisory capacity. A big thank you to those people who added to the enjoyment of the day.
Historical battle - This was fought between Eumenes (E) and Antigonus (A). Both commanders were attached ro their right flanks and both got the better of their opponents so bit of a see saw effect. Meanwhile the pike in the centre were heavily engaged. Eventually the better quality of (E)'s pike and (A) withdrew his army to the high ground leaving (E) in possesion of the battlefield.
Our Battle - both armies 630 points approx. As you would expect flanks mainly mounted. (E)'s centre had 5 large units of pike 2 deep with VBU 6/5 or 5/4 whereas (A) had 5 large pike units 3 deep of poorer quality al ranks with VBU of 4.
Both armies advanced towards each other. At that time i was in command of (A)'s pike and rashly doubled moved my attached general didnt save me from disorder as i rolled  a 1. (E)'s pike took full advantage who did multiple moves to catch me in disorder whilst retaing good order themselves which pushed me back but they were unable or failed to pursue. (A)'s pike were lucky that they were first to re activate all rallied from disorder and counter atacked. In the resulting 4 combats (E)'s pike failed to score a single hit so no cohesion tests for (A) whereas (E) took some losses. This was the turning point with (E)'s centre eventually breaking and adding flank command losses took out the army
In the meantime (E) with his right flank broke through their opponent but by close of play had not destoyed that command. They nealy gained a consolation prize when the Agema wheeled round and caught a pike blck in the rear that was also frontally engaged. It wasn't their day as the pike rolled two 1's on both rounds of combat so avoided destruction.
(A)'s attackon the other flank was a half hearted affair and unresolved at the time of (E)'s collapse.
Some games are more memorable than others this was one of them action and surprises all the way. Once again thanks to all the guest players who made it such an enjoyable occasion.
Pictures to follow shortly. ERIC 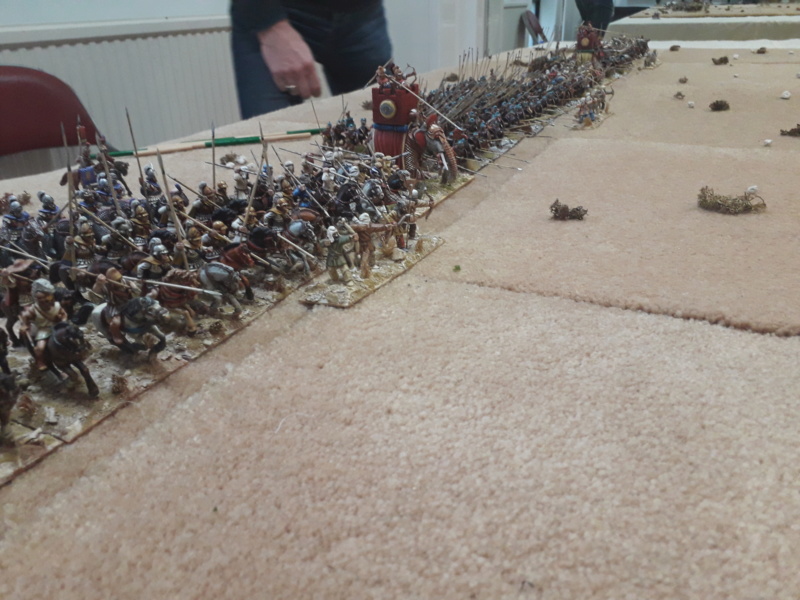 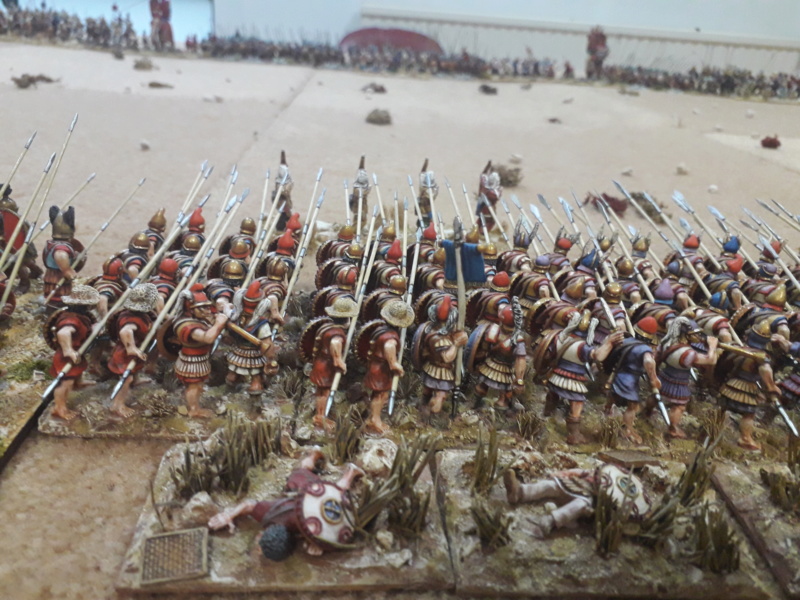 Eumenes's pikemen eyeing up the enemy. 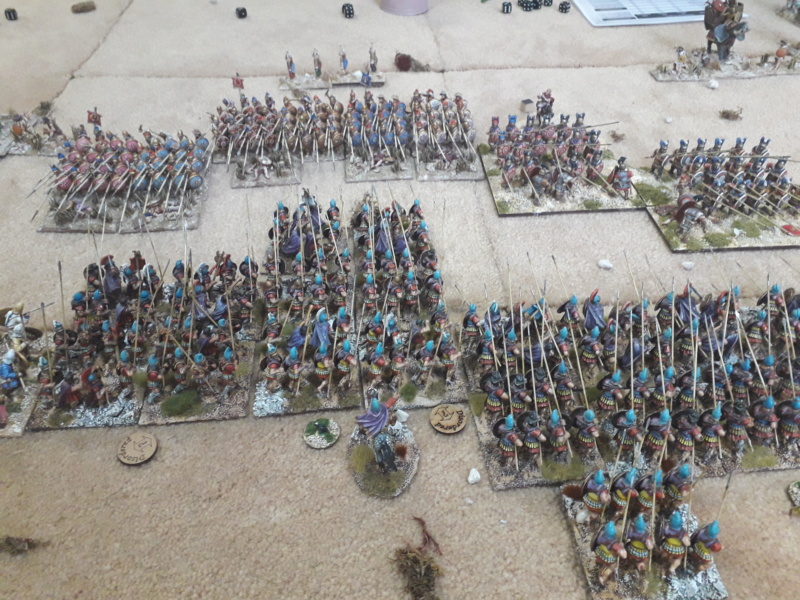 Clasj of pike in the centre 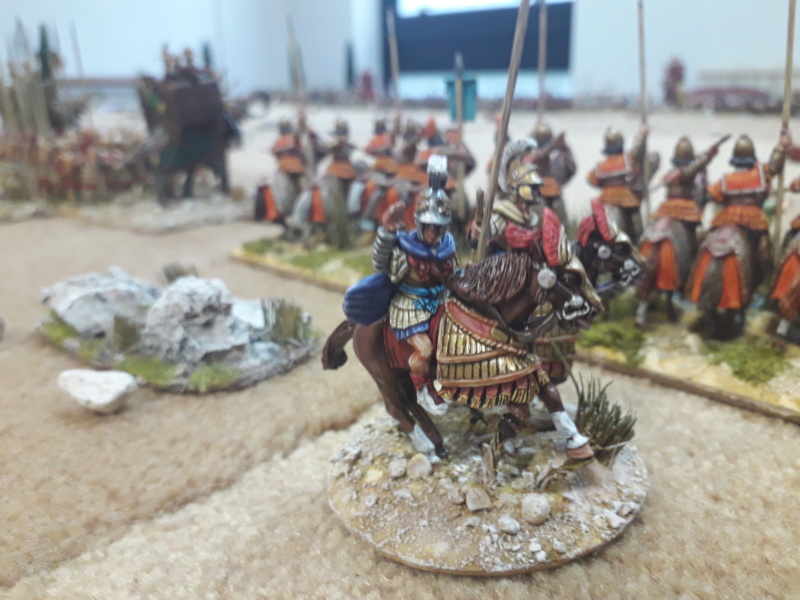 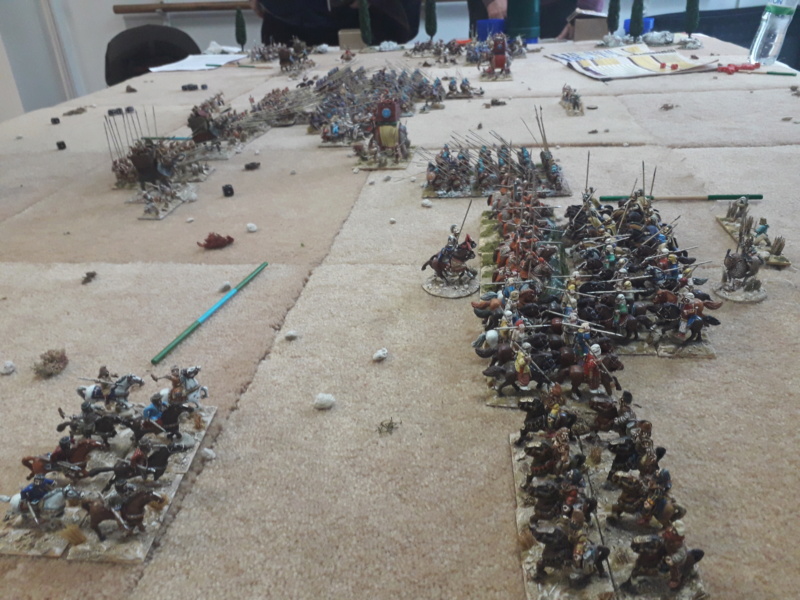 EEumenes attack about to break through. Pike heavily engaged in centre 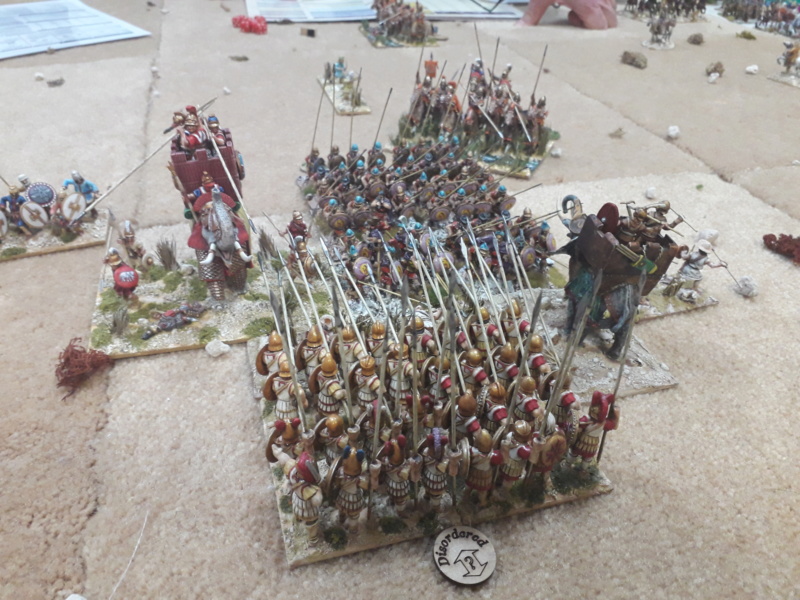 AN ANTIGONUS'S PIKE BLOCK CAUGHT IN REAR. IT SURVIVED TO COHESION TESTS BOTH NEEDING A 1 TO SURVIVE. SAVED BY EUMENES'S ARMY COLLAPSE 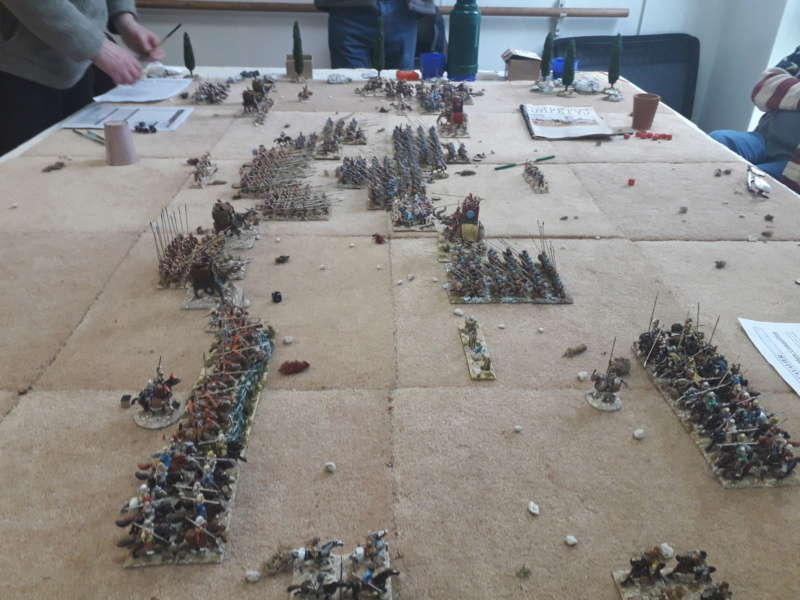 EARLIER IN BATTLE JUST AFTER INITIAL CLASH OF PIKES WITH THE FLANKS ABOUT TO ATTACK.