There can be a lot of room on a BI2 table, and it is possible for troops to spend a lot of time chasing each other around, if one side or the other wants to avoid contact. I've been wondering whether some sort of objective could be useful.

Clearly, I could just have the 'baggage' rules from 'full' Impetus, but that seems more complicated than is good for BI2. So I wondered about a simple objective piece.

So if you try to run away from your opponent's units, you'll probably lose 2VD and there is a greater chance the game will be brought to a conclusion. If neither player wants to give up the 2VD, the game will be focused anyway, and again the conclusion should come quickly.

Any thoughts or comments?

So far only played 5 games of BI2, all against my brother and we are both keen to get into action so never have a problem with lack of contact! Actually the one time so far when I have tried to be defensive with Milanese renaissance troops it did not work out at all.

I guess from this you could easily add in the Baggage element from impetus rules which for me would give a better visual aspect.

Will be interesting to see if this problem comes up at the proposed Basic Impetus 2 mini competition? To encourage more aggressive play you could always introduce a house rule for competitions with bonus points for a win? 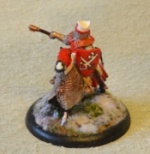 Thanks, Jez. Yes, using the baggage rules is a possibility, and I agree that the visual effect is important.

On the other hand, if you use an 'objective piece', as I'd said, then units can move on and off it,which isn't possible with the baggage rules. In particular, a player may have one of his own units on the objective to defend it. You could also have a vignette on a 6cm square base, which could cover the objective piece for most of the time, and be temporarily removed when one or other player wants to move a unit onto the objective.

For the tournament, I'm not planning any changes to the rules themselves but am already thinking about a scoring system to encourage decisive play.

Sounds good and sure everyone will be happy to try anything out? Guess there can also be a set time limit per game to encourage fast play - or even set number of turns. I guess if you are happy aiming for a lower scoring "draw", nothing wrong with being defensive?

I don't plan to use my 'objective' idea this time, unless everyone else wants to. Meanwhile, I've put some thoughts on a scoring system on the thread about the tournament.

And yes, another player (or even more) would be good.