are not really quoted in the rules. Does it take one action?

Do we have to implement other rules to keep dismounted horses at their place (because they could flee if frightened by enemies or friendly fires/fighting... or be caught by others figures).
More generally, how do you manage the possibility to dismount cavalryman? I particularly think to the Peninsula war with French Dragoons acting as infantrymen when necessary against Spanish guerilla or other "bandidos". 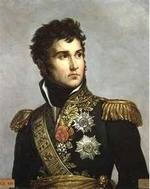